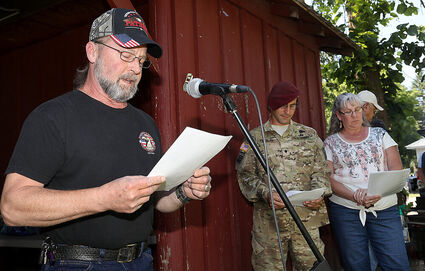 HISTORIC WORDS – Shawn Fielders reads the words of the Declaration of Independence of 1776 during the Independence Day celebration at Fred Young Park. Shawn's wife, Charee, and son, Hunter, also took turns with the famous document.

Independence Day in Plains began with a blast from the colonial past with the reading of the Declaration of Independence by three Plains residents at Fred Young Park.

Shawn and Charee Fielders, along with their son, Hunter, donned in his former Army Airborne uniform, took turns reading the 1,337...