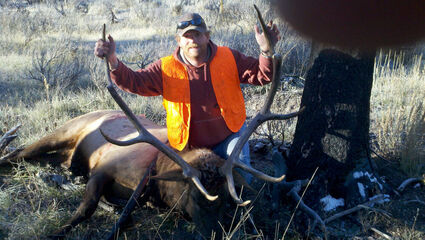 He faced many challenges in life. He was also blessed in more ways than he could imagine. He never let his disability hold him back, and enjoyed hunting and camping, and going for long rides in the mountains. He worked at the Mint Casino for the past 6 years, and was great at his job and there was never a stranger to him. He worked in Wyoming and Montana for a number of years. He enjoyed cooking in which he did a lot of. Russell was preceded in death by his oldest sister Donna in 1975, his mother Robin Ovitt in 2015 and his father Douglass Ovitt in 2018. His Grandparents Roland and Donna McCrea, Mary Pearson and Wilfred Ovitt, some aunts, uncles and cousins. He is survived by his sons, Beau Ovitt, 19, and James Ovitt, 15, of Plains, Montana, his sister Angela Ovitt and husband Rick Yokum of Plains; his niece Dezarae Chenoske and Jeremy Chenoske, great nephew Jarren Chenoske of Libby, Montana, niece Forest Yokem of Billings, Montana, niece Mariah Ovitt of Plains; and several aunts, uncles and cousins.

Always remember family and friends are very important and here's my favorite saying to most who knew me. "Whats up chief" and "right on." or "hey cousin," and to his sister "Hey Negg!"

There will be a celebration of life for Russ at the Mint Casino. Please come join us on Saturday, June 25, at 2 p.m.