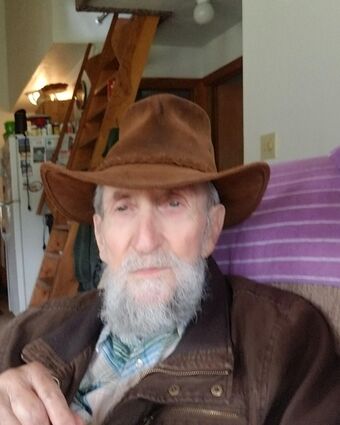 Charles J. Haun passed in his home peacefully in the late evening on Tuesday, June 21, 2022.

Charles was born in Willits, California, to Charles and Thelma Haun, he was the oldest of four children.

Charles graduated, president of F.F.A. from Willits High School in 1954. He joined the United States Navy, promoted to Airman, and served five years.

Charles was a pilot with the Forestry, and a private pilot. He was an insurance sells representative, restaurant owner, concrete layer, truck driver hauling rocket fuel and many other trades but being a pilot was his passion.

Charles moved to Plains, Montana, with his wife Evelyn in 1996 to help family care for their mother.

Charles and Evelyn moved to Thompson Falls in 1998 where he later retired.

Charles loved fly fishing, hunting, hiking, anything outdoors. He enjoyed working on his property. His love for animals was very evident, many deer, turkeys and even a black rabbit know as shadow became family.

Charles was a faithful catholic and cherished his parish. He was a loving husband, father, grandfather, great grandfather, friend and will be greatly missed.

Charles is survived by his wife Evelyn Haun, of 46 years. His children, Michael and Melissa Latham, Morgan and Dorothy Haun, Patrick Haun, Tammie and Kenny Lee; his sister Susan Bartholomew and Jim Bartholomew; seven grandchildren, 15 great-grandchildren and a host of nieces, nephews, and cousins.

The memorial service will be Thursday, June 30, at St. William's Parish, Thompson Falls, with Rosary at 1 p.m., Mass at 2 p.m. and a luncheon to follow.

In lieu of flowers, any contribution towards funeral expense would be greatly appreciated.