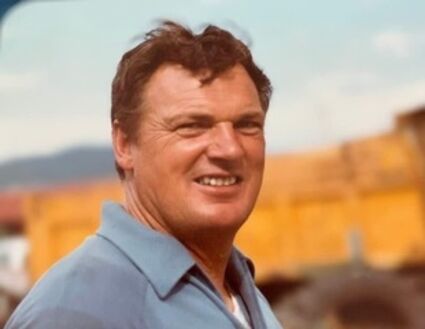 Mike Harbine died July 26, 2022, at Clark Fork Valley Hospital in Plains. He was born January 30, 1937, in Ukiah, California, to Elwin (Buck) and Ida Harbine. He moved with his parents and three older siblings to western Montana in 1942. They lived on a farm between Plains and Thompson Falls, along the Clark Fork River.

Mike held a master's degree in business, but his education did not lead to office work. He preferred working hard and independently at logging, buying and repairing heavy equipment for sale, gold mining and mint farming. He liked taking risks, like hauling equipment up logging roads where his trailer tires might hang over the edge, or moving a house down a Missoula freeway at rush hour. He was a friend and helper to many. He was greatly loved by his family.

Mike's life was made richer by his son Michael Harbine, who is like him in many ways. They shared a deep bond. He was especially close to his oldest niece, Dana Headapohl, with whom he enjoyed many discussions on science, medicine and history. He also rebuilt her driveway after a flood and helped her move a couple of houses.

Mike's father Buck died in a logging accident in 1954 when Mike was 17 years old. He had a younger sister and brother by then, and his mother Ida couldn't run the farm by herself. Mike went to college in Bozeman. He graduated with a bachelor's degree in 1959. During his college years he drove back to Plains on weekends to help on the farm, to fix the tractors and to coach his younger siblings as if he were their father. This was a tough job, as the siblings sometimes rebelled!

Mike had a genius for operating and repairing machinery. There were tractors on the farm, sports cars (Crosley, Austin Healy, Sunbeam Alpine) during his college years, and finally logging trucks and heavy equipment. He used his last Sunbeam Alpine like a woods truck, folding his six-foot frame into the driver's seat and hauling chainsaws and greasy equipment parts in the remaining space until he gave in and bought a pickup.

During his mint farming phase, he pressed his visiting nieces and nephews into service hoeing weeds and moving irrigation pipe. As a reward, he'd load them into his Crosley and drive them to town for ice cream.

Mike will be remembered also for his love of adversity. Give him a problem and his creative nature went into high gear. He took great joy in rescuing people and fixing things. When his Mack truck broke down near Whitehorse in 1981, his mother back in Missoula said, "Good. He's not happy unless something goes wrong." He made some Yukon friends on that trip and enjoyed the overhaul immensely.

Mike is survived by his son Michael Harbine and Michael's wife Casey; his brothers Patrick and Isabelle Harbine and Elwin (Chic) and Sally Harbine; sister Linda and Larry Martin; many nieces and nephews; and his friend Joy Nelson.

His parents, his brother Elwin (Twinks) Harbine, and his sister Ruth Headapohl preceded him in death.

Friends are invited to a Celebration of Life at Mike's favorite breakfast place, the Forest Lounge, from 9 to 11 a.m. on September 15. A family service will be held September 17 in Plains.