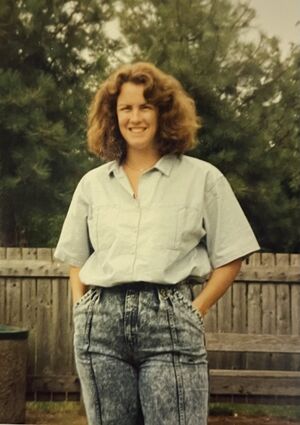 Mary Ann (Eiser) Larkin, 62, passed away after a two-year battle with Acute Myeloid Leukemia on September 16, 2022. Mary was born in Atlanta, Georgia, to Robert and Margaret Eiser on March 20, 1960. Mary was the fourth of six children.

In 1978, Mary graduated from Springbrook in Silver Spring, Maryland. After high school, she worked a variety of different jobs, but her true passion was to be a beautician. She attended Montgomery School of Cosmetology for a year and enjoyed doing hair for people, a joy she continued with that included her husband's hair.

Mary was very adventurous, outgoing and always the life of the party, which led her to Noxon, Montana, where she met her husband, Colin Larkin, in 1982. It was love at first sight and they married that year at the Hitching Post. As a couple, they played a multitude of sports such as co-ed softball, frisbee and darts. They also spent many hours singing and playing music together.

Mary is survived by her husband of 40 years, Colin; five children, Matthew, Terrell (Stephanie), Joseph, Sarah (Jason) and Stephanie; grandchildren, Ezekiel and Averee; siblings, Sue, Patricia (Mike), Larry (Ruthann) and Tony; along with many other family members and friends.

Services will be held on September 24, 2022 at 1 p.m. (MST) at the Noxon Multipurpose Room with graveside following at the Noxon Cemetery.