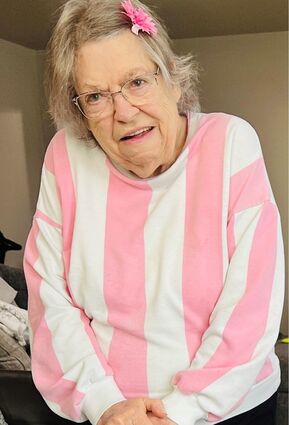 Barbara Prophet passed away and went to be with our Heavenly Father on September 16, 2022, with her grandchildren Misty Beckett and Clayton Matthew by her side after a long bout with kidney disease and heart failure.

Barb was born September 9, 1938, in Butte, Montana, to Robert William Harwood and Mabel Alma (Wombacher) Harwood. Barb grew up and went to school in Butte and spent her summers in Redrock, Montana, with her grandparents Henry and Genevieve Wombacher, where she learned to tie flies for Wombacher Fly Company. She met her future husband Harold Brent Prophet in Armstead, Montana, and they were later married in Elko, Nevada, in 1961. They shared a loving marriage of nearly 57 years. Barbara and Brent welcomed the birth of their daughter Dawn Marie Prophet in 1966 and moved their family to Trout Creek, Montana, in 1967. Barb and Brent planted roots there and held numerous positions within the community including as a postal carrier, and a custodian at the school.

Trout Creek was their home, and Barb and her husband Brent made many special friendships there. Brent began working at the sawmill and Barb and Brent quickly became close friends with Mark and his wife Midge Matthew and that friendship grew to become more like their own family. Mark and Midge Matthew and their children Jim, Kim, Kirby, Cinda, Gary, Marilyn, and all their families were a huge part of their lives and Barb loved them all as her own family.

Barbara was well known for her many talents in life, especially her artistic side including her paintings and woodwork. Barb loved playing cards with family and friends over the years, mostly hand and foot and pinochle. She enjoyed taking care of others and being that voice of reason that many people needed. She had served as the treasurer for the senior center and made many friends there. The community of Trout Creek, especially those involved with the Senior Center really came together and helped Barbara fulfill her wishes of living out her days in her home, one of the many reasons they loved the life they built there. Barb put up a long hard fight and consistently amazed everyone around her with her tenacity and drive to get things done, all the while keeping her witty sense of humor along the way, and she will be greatly missed.

A memorial service will be held next year to celebrate Barb's life.