Megan, Jody and Ellie honored as District 7B all-conference 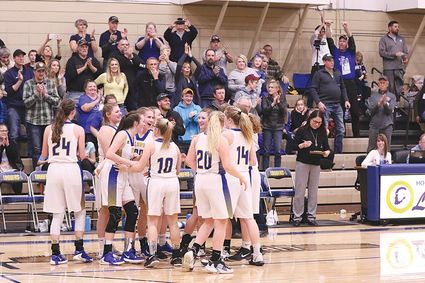 THAT WINNING MOMENT - The Thompson Falls fans in Libby stand up and cheer for their Lady Hawks after the Falls girls defeated Eureka in the District 7B tournament championship game back on Feb. 22.

Lady Hawks Megan Baxter, Jody Detlaff and Ellie Baxter have been honored as District 7B all-conference performers for their fine play this past season.

The Lady Hawks won the regular season and tournament conference championships before winning third in the Western B divisional tournament and just missing a berth into last week's abbreviated State B tournament, compiling an impressive 19-5 record along the way.

And the future looks bright for the Lady Hawks as Megan and Jody are juniors and Ellie a freshman.