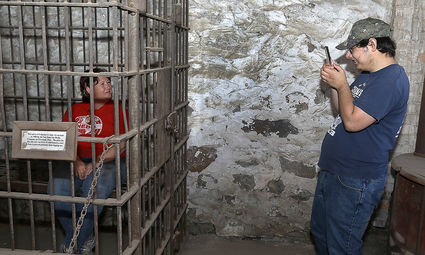 GOTCHA! – Alex Kelly-Beeler of St. Regis takes a photo of his aunt, Melody Armistead, in the Horse Plains Jail. Mayor Dan Rowan was at the jail and opened it for them to take a look inside.

The Town of Plains now officially has a jail, though it's unlikely criminals will be housed there. The Plains site has actually been the jail home since it was built in 1904 - Plains was incorporated in 1907 - but until last week it was actually owned by Sanders County.