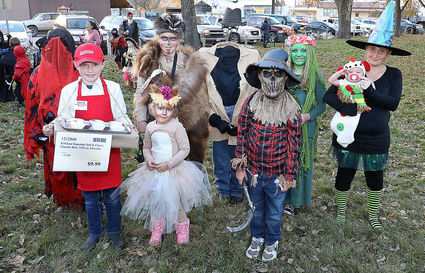 BEST OF THE BEST – The winners of the Plains Lions Club Halloween costume contest are (front row from left) Ryker Anderson, 7, as a Costco food sample station employee, Aspen Glase, 4, as a baby buck, and Kingston Nyomo, as a scarecrow. Back row from the left: James Dyck as the Red Reaper, Sage Doble, as a trapper, Tia Bellinger, as the Invisible Man, Karissa French, a green-faced princess, and Gideon Hardy as a snowman.

The winner of the Plains Lions Club Halloween costume contest couldn't even be seen. The "Invisible Man" took first place and the top prize of $20 and he was actually a she.

Tia Bellinger of Plains dressed in a dark suit and hat and black glasses, which appeared to be suspended. The 10-year-o...