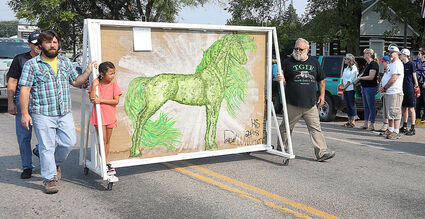 JOURNEY EAST – The Green Star Families horse painting makes its way down Railroad Street during the Sanders County Fair Parade as part of its "Veteran Suicide Awareness Journey" across the United States. The painting is being pulled through town by David Williams (right) one of the painting's artists, his son, Kristafer (left), Robert Hicks (behind) and Brad Kinzie (not seen). Catching a ride on the frame is Chloe Monselet.

Having a horse in a parade is not unusual, but a green one seems to stand out, especially when it's being pulled by people.

The horse is a painting done by local artists to pay tribute to Green Star Families - those who lost veteran family members to suicide - an epidemic that seems to be a cons...